Big in Asia as a band – Between myth and reality

After a couple of years touring with bands and developing their presence in Asia, I always end up having this "Big in Asia syndrome" conversation with several bands :

John, when are we going to be big in Asia, we don't see the ROI. We have been touring once, twice, thrice (some say even just one time..) and we are still struggling to get full house shows or be invited to festivals and getting high fee.

Let's be honest here not all the artists or bands are successful, just a handful of them and even some popular artists in Europe or US will hardly fill completely a venue in Asia.

Asia has a lot of opportunities to offer, but it does not mean it will be an easy way !

There is a myth that if you go to Asia you will play automatically in a full house venue/arena, fans will be waiting hours before your show.

Believe me, it's not going to happen. At least not immediately.

A question each artist should ask before investing time and effort in Asia:

If you are not popular in your home country or in your region, why would you expect to be big in Asia ?

Usually, with most of the bands I brought on tour, I can determine relatively quickly the ones who will do well and the ones who may struggle at certain level. It's also interesting to see sometimes that those issues are also happening in their home country.

Let's face it: if you have issues to get a good crowd at your show in your hometown, chances are that you may have similar issues when touring in Asia. Patterns tend to stay wherever you go.

What could be the factors that a band is struggling to be successful ?

(I listed a series of factors, many more can be added);

Some foundations before being big in Asia ?

Before starting any activity in Asia such as searching for gigs, you should keep in mind the following:

If you manage to cover all those steps listed above, it means that you are building a presence, not big in Asia yet though.

Again it's really important that you do your homework first

Before attempting any touring, there are some actions you can already work on. Just from your desk.

In Asia, you have a lot of countries using the same social media platforms or music streaming as you such as Facebook, Instagram or Spotify. It means you can reach them,

If you are interested to know a bit more about Spotify and how you can develop your strategy, you can check this recent article I wrote.

By looking at the Spotify page you can see where the streaming music platform is present in Asia:

Also, by looking at the number of Facebook user per country in just South East Asia (numbers gathered by Statista), we can see that Facebook is still very present in that region. 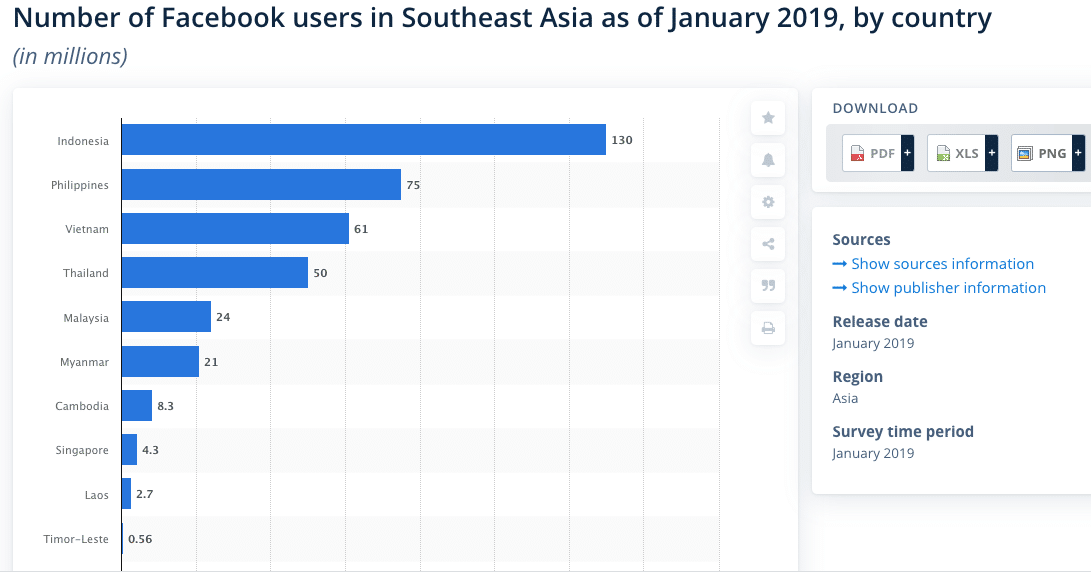 As you can see Spotify (but also other streaming platforms such as Deezer) and Facebook suite (Facebook, Instagram, What's app) are present in a good amount of countries across Asia. It means, you have ways to reach those users.

You can definitely set up an online digital strategy in place in order to test your music among those users and look at ways to grow your audience such as:

Being able to play or being present at one of the Asian showcases is probably a very good step forward in your touring plan.

Remember networking is key. After attending several showcases around Asia (South Korea, China, Singapore..), I always see several acts per year managing their way to tour afterwards in the region.

If you want to know about music showcases and how to get the best of it, you can check this post I wrote.

Now it's time for touring !

Make the difference while touring and build a solid fanbase.

Be creative during touring by:

Keep repeating those steps, don't forget to re-evaluate your strategy on regular basis and analyse what went right and what went wrong but also which market was the most responsive.

Don't forget to keep your audience engaged by providing new content on regular basis (get a post schedule in place).

Finally, I used to say that Asia is a territory with great opportunities around, it's a matter of being present, steady, engaged with your audience but also with the team working for you before to get recognition.

Why not you try to work on the key-points above and see how it goes. And remember, being big in Asia may take some times and surely a lot of efforts need to be engaged before seeing the first sign.

17 years experience in the Music Industry, I worked as a promoter in Bangkok for 8 years where I set up shows for Backstreet Boys, Death Cab For Cutie, Mogwai, Diana Krall, Herbie Hancock.. In 2016, I created my own artist management agency which focus on the development of emerging artists

This website uses cookies to improve your experience while you navigate through the website. Out of these, the cookies that are categorized as necessary are stored on your browser as they are essential for the working of basic functionalities of the website. We also use third-party cookies that help us analyze and understand how you use this website. These cookies will be stored in your browser only with your consent. You also have the option to opt-out of these cookies. But opting out of some of these cookies may affect your browsing experience.
Necessary Always Enabled
Necessary cookies are absolutely essential for the website to function properly. This category only includes cookies that ensures basic functionalities and security features of the website. These cookies do not store any personal information.
Non-necessary
Any cookies that may not be particularly necessary for the website to function and is used specifically to collect user personal data via analytics, ads, other embedded contents are termed as non-necessary cookies. It is mandatory to procure user consent prior to running these cookies on your website.
SAVE & ACCEPT